At a recent panel discussion about what drives and inspires local women entrepreneurs — and specifically mompreneurs — one theme came up over and over: these successful, driven women all left their previous careers for the freedom and flexibility that they simply couldn’t find in the corporate workplace. 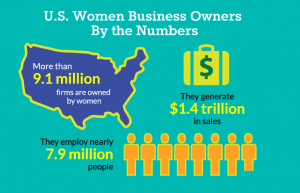 Persistent gender bias in workplace policies — about the very real demands of balancing family and a career — force many women off the corporate ladder and into entrepreneurship. While men continue to thrive under the status quo, moms of small children encounter meager maternity leave policies and a work culture designed in the 1950’s, along with the entrenched belief by many that mothers simply don’t have what it takes to make it to the top.

What they don’t have is flexibility — to attend their child’s kindergarten performance, doctors appointments and other important events that simply can’t be assigned to the babysitter. Unless women in many corporate environments are willing to re-commit to 60-hour weeks post maternity leave, they are seen as unpromotable — often despite stellar experience, education, leadership, success and time management skills. It is incredibly short-sighted and explains why the number of female CEO’s in the Fortune 500 continues to hover at a measly 4%.

A recent study of 132 companies published by Sheryl Sandberg’s Lean In.org found that the U.S. is still decades away from gender equality at work, even as more women try to climb the ladder.

Here are just a few of the study’s depressing findings, from the Money.com article referenced above: 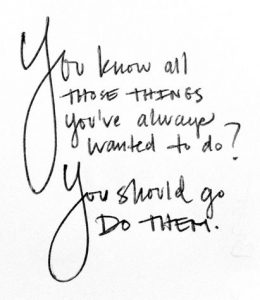 So what’s a smart, ambitious, creative and frustrated woman with great ideas to do? Find your passion and follow your dream. That’s what each of the panelists at the recent event I attended did, and they have never looked back.

“I work (and work out) early in the morning before my kids wake up. I work with them on my lap, or on the phone while waiting to pick them up from pre-school — I’m there, I show up, I meet the other parents, and they have no idea I’m working,” said podcast host and writer Sarah Bagley, a mother of three whose terrific work now focuses on living your biggest life. “It’s been so incredibly liberating.”

“I was scared,” admitted Ashley Bernardi, mother of three young daughters, former CBS News producer and founder of Nardi Media. “But ever since starting my own company I’ve never been happier and never looked back. Having worked on the other side, I was born to be a publicist and I am killing it, while also reveling in my family life and calling my own shots. This is how I define success!”

As founder of Awesome Women Entrepreneurs (AWE) and co-host of the AWE Radio Talk Show, I hear similar stories every week: women who gave up on corporate America, discovered (or fell into) their passion, hung out a shingle and are riding the wave of entrepreneurship — all while still being present in the other important aspects of their lives. Whether its aging parents, children, community causes or other pursuits, these women are busy pursuing their dreams without anyone telling them they can’t, or that they talk too much, or that they’re too aggressive, or that they need to simmer down and step back a bit.

We all agree that if many of the women working long corporate hours for less pay and little support from their managers knew what we know — as they watch their male colleagues cruise to the top — half of them would quit their jobs and join the revolution.

And as Sara Blakely, billionaire founder of Spanx, said: “I’ve always had that gratitude that I had the opportunity to pursue my potential. So I think my story says that, when women are given the chance and the opportunity, we can achieve a lot. We deliver. We can make the world a better place, one butt at a time.”

Awesome women, set yourselves free: Get off your butts, go forth and conquer!